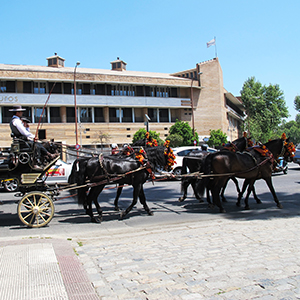 I told you I would tell you about Seville, Henry, and I will. It was a beautiful city full of large, fancy mansions made of stucco with tile roofs. And of course the streets were full of horse-drawn carriages. Many of the horses were decorated with pom-poms. I don’t know if they could dance the waltz but they looked like they could. We were there during the April festival so many people were dressed in traditional costumes. The woman wore tight flamenco dresses that flared at the bottom and had flowers in their hair. It was fun to walk around town and see the cathedral, the castle, the bull-fighting ring and other monuments. We walked through the very large old Jewish quarter with its narrow streets filled with Tapas restaurants and shops. We stopped for lunch at one of the Tapas restaurants. Papa and I were on our own for a few hours but we didn’t have time to do any in-depth tour because we chose to see as much of the town as possible. As I said, it was quite pretty and different from any place we had been.

Yesterday, we got up at 6 AM to try and see the Rock of Gibraltar as we passed through the Straits. But it was so dark we could barely make out the word “Prudential.”

Yesterday was also a day at sea and we saw Frances the magician perform. (Remember I told you about him from our hike with Lola?) He was quite good and amazed us all.

Last night they had an Elton John imitator with the band in the large night club. He was really excellent and we enjoyed the show very much. He didn’t even try to kiss my hand. Papa thought if he tried to kiss anyone’s hand, it would be his.

I want to tell you a joke they played on a little boy in the restaurant at lunch today just in case someone tries to trick you like this. The little boy ordered a hamburger and they delivered it to him on a plate. When the little boy opened the bun to put on some ketchup, there was nothing there! Everyone has a good laugh, finally the boy did too. They did give him his hamburger after all.

Today is our last day and we will tour Valencia. I may not write again because we disembark at Barcelona very early tomorrow and then we are in a hotel. But we may have WI-FI. We’ll see.

So be good, Henry, until you hear from us again.