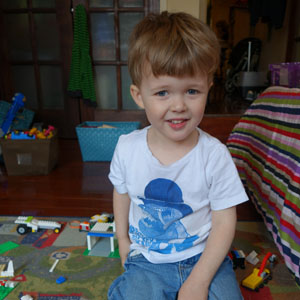 He’s a real handful to his parents and a complete joy to his grandparents. What a kid!

One evening, after Henry had been put to bed by his parents, they heard him yelling “Mom, Mom!” His mother went into his bedroom to see what the problem was. Henry told her, “I can’t fall asleep because when I jump up and down on my bed, it makes too much noise.”

Paul was serving dinner – fish and asparagus. He asked Henry if he would like some asparagus. Henry repeated the word, seeming to like the sound of it, and said yes. When Paul placed a spear of asparagus on his plate, Henry looked it over and said, “Maybe not.”

Henry was sitting on the toilet and requested some company in the bathroom. Papa joined him. Henry, wanting to engage him in conversation, began appropriately,”Poops, granola, and some dogs are brown.”

We were taking a walk in the neighborhood when we passed a church. Henry said, “That’s a church, we’re not going in there.”

Sara and Paul were going out, leaving Gramma and Papa to watch Henry. Sara tells Henry to do what they ask him to do. Henry said, “Do you think they’ll tell me to play with my legos?”

Sara came home from work one evening and Henry ran out to meet her. He said, excitedly, “ I made a car with no top.” Sara says, “That’s called a convertible, Henry.” Henry says, “I know but I can’t say that.”

As we were walking through Greenwood Cemetery, Henry had all kinds of questions about death and burial. Sara said, “Isn’t this a beautiful place? Wouldn’t you like to be buried here?” Henry answered with a resounding, “NO.”

Henry confuses the term “I didn’t noticed that.” With “I didn’t know that.” It can be quite funny in the right context. As in, “Henry, sometimes when people get old, they die and get buried.” Henry says, “I didn’t notice that.”

We took Henry to the Natural History Museum. A docent had a table set up to demonstrate the different jaws and teeth of fish.  Henry could barely see the top of the table or reach the exhibits. She held up the jaw of a dolphin and said, “This is a dolphin’s jaw. Do you know what a dolphin is?” Henry didn’t hesitate before answering, ”It’s a mammal.”  She was quite impressed with this little squirt and showed him another jaw with sharp teeth and asked him if he knew what would have sharp teeth like these.  Once again, with no hesitation, Henry said,”A shark.” So much for a demonstration that can’t even surprise a three year old! A bit later, after we had viewed the fish gallery, the table was gone.

Speaking of mammals, Papa was wearing a light t-shirt that revealed his physique. Henry noticed this and said, “Papa, do you have nipples?” (He knows this is the sure sign of a mammal.)

We were sitting on a bench resting after walking through the botanical garden. Henry had been very busy in the garden pretending to make asphalt with dirt and the various implements (funnels, scales, inclines, etc.) they had set up on a table.  Then Gramma said, ”Look Henry, I bet this patio where we’re sitting is made of asphalt.” Henry said, ”Actually, it’s concrete.”  (Gramma wished he would have said, “Gramma, do you think this patio is made of asphalt? Then she would have had a clue she was about to embarrass herself.)

Henry received lights which flash and a bell for his beloved balance bike for Easter. Now, it was no longer his motorcycle but an ambulance. He instructed Gramma to be a car that was always getting in the way of the ambulance. When will she ever learn?

Henry is quite self-aware. He knows there are times when his emotions get the best of him and he has a meltdown. He wanted to warn Gramma of this when she arrived for a visit. He said,”Gramma, sometimes I cry.”

Gramma told Henry he was a “hot ticket” – an expression from his great grandmother meaning a very entertaining person. Henry said, “I’m NOT a hot ticket. I’m a little boy.”

Yes, he’s quite self-aware. After his parents took him to see a Chinese New Year’s celebration with plenty of fireworks, Gramma asked him how he liked it. Henry said, ”Noises like that can scare a little boy.”

At dinnertime, Henry was sitting there quietly buttering his fifth piece of bread. Gramma said to him, “I am always wondering what’s going on in the little head of yours.” Henry turned to her and said, “Right now, I’m thinking about butter.”

Henry was on the subway and his mother gave him a dollar to give to the four elderly African Americans who were serenading us. When he handed it to the toothless gentleman with the lovely baritone voice, the man said, “I can tell, you’re a real New Yorker!” Henry said, “Actually, I’m from Brooklyn and Michigan.” (Actually is a word he uses often these days.)

When Henry is hungry, he lets you know. When he goes into a restaurant, he orders his meal when the waiter first appears at the table, taking drink orders. He makes it quite clear what he wants. “I want a grilled cheese sandwich.” “I want some mac and cheese.” One time we went into a restaurant and Henry was dismayed when he looked around. “Where’s the food?” he asked. Once, when we ordered a pizza delivery, Henry asked Gramma to call back and tell them to hurry. Gramma pretended to do this. Henry wasn’t totally satisfied and told her, ”Call back and tell them louder.”

Henry gets quite vigilant when he notices the bus boy starting to clear the plates. He likes to keep his food as long as possible. He used to throw his arms around his plate and cover it with his head before the guy could take it away. Now, he is more mature. He simply says, “NO!”

Henry builds machines of all kinds with legos. From snow blowers to excavators to large concrete saws. He knows the names of all the parts. One of the favorites was his “Remote Controlled Robot Painting Machine on Wheels.” He built a separate remote control for this machine with two levers and it would not move unless someone moved the levers forward or back. Another great build was his digger with stabilizers. Henry explained, “He raises the stabilizers when he wants to drive; he lowers them when he wants to dig.” (Yes he uses the term “stabilizers.”)

Henry’s trucks are very real to him. They have their own personalities. When Gramma and Papa tried to address the fireman they assumed were INSIDE the cab of Henry’s fire truck, he said, quite offended, “Talk to the truck!”

Henry likes to build everything he sees with legos. He especially loves any kind of truck or machine. One day, Gramma told him about the Better Made potato chip factory and he asked her to repeat the story a couple of times. Then he asked his parents if there was a video of a potato chip factory they could watch. They found one on Youtube. That was OK but Henry really wanted to see a video  of a TOY potato chip factory. Not a real problem though, he knew he could build it anyway. After our walk through Greenwood Cemetery, Henry came home and built a nice rectangular plot of grass with a tall monument at the end. But the piece de resistance  was the person he made from a flat rectangular lego by snapping a couple of eyes at one end. He took this and snapped it securely UNDER the plot of grass – with only the eyes peeking out from the ground.

When we were playing fire trucks with Henry, he would tell us what the poor people whose house was burning would say as they stood out on the sidewalk listening for the siren. He told us to say, ”What the heck is that noise?”  (Luckily Gramma remembers to say “heck” in front of Henry. It could be worse.)