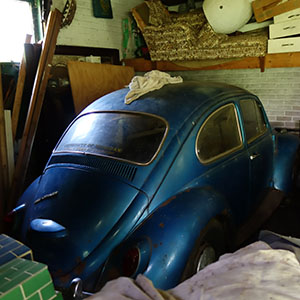 After my husband, John, and I bought our first home, we kept asking ourselves how we managed to buy a home next to that place. The house next door looked bad, really bad. But we were young and naive and so in love with our own shiny new house we just didn’t see it. Until it was too late.

The first weekend after we moved in, John went outside to clean up our back yard. Shortly, he came inside to show me a weird object he found. There were many of them scattered around the yard. They were V-shaped pieces of aluminum-siding about three feet long. He couldn’t figure out what sort of trim they were and began to study what he could see of the house next door, the house we really hadn’t seen before. There was a six foot privacy fence along that side of our property that hid much of it from view. Then we noticed the windmill on the roof. The windmill was constructed from a bicycle wheel mounted to a pole. These V-shaped objects were nailed to the rim of the wheel to catch the wind. It appeared to have worked quite well as a strong wind must have blown these projectiles all over our yard. John, an engineer, figured this may have been generating enough power to run your average electric toothbrush if you only brushed every few days or so.

As the weeks went by, we noticed that a stand of poplars on the lot next door was starting to disappear. We also noticed a bad burning smell from the property. John went out front to investigate. Adding to the wind power, the neighbor was now harnessing the power of fire. On the front lawn, he had installed a water heater atop what looked like a giant barbeque grill. The grill was being fed with the green wood from the poplar trees. He was heating the water and using hoses to run the hot water into the house. Now he could take a bath when he brushed his teeth.

One day as we sat in our back yard we heard the sound of a chain saw. John peeked through the fence and saw the neighbor at work building an addition to the back of his house. The room was framed with clothes posts and old two-by-fours. The floor was dirt. He was using the chainsaw to cut paneling for the outside walls. This was the Midwest where we have actual winters. I tried to imagine what sort of use this room would have but it was beyond my capability and gave me a headache.

Eventually, the neighbor lost the house to foreclosure and moved. We bought the property and had the house torn down to the cheers of the entire neighborhood. While we were inspecting the property for any potentially explosive materials before the back hoe knocked it over, we looked in the garage. The garaged was filled with junk from floor to ceiling. In the middle of the junk we found a VW beetle.

How could we have bought a home next door to this giant mess in an otherwise neat neighborhood? I can only say that you see what you want to see and it scares me. Perception is not your friend.

A few years later we moved to a new neighborhood. This time our home was not shiny and new but old and historic and we were just as excited as when we bought our first home. After settling in a bit we decided to take a stroll. The house next door looked OK, maybe a little peeling paint but, after all, these were older homes. As we passed the driveway, we both stopped. The garage door was open and inside, amid the junk piled from floor to ceiling, we could see the back end of a VW beetle peeking out.