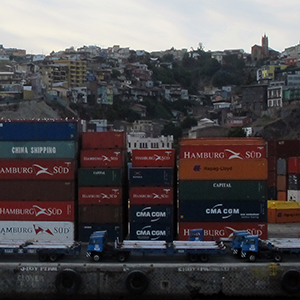 Today, I’ll tell you of a place
Called Valparaiso Chile.
A large sea port is on its coast,
The colorful town’s quite hilly.

The seaport is so full of ships
It is hard to see the ocean.
The ships bob softly up and down.
Gentle waves create this motion.

Henry, the ships come into port
To Chile and bring many things.
Like shirts and shoes and levis too,
And ipads and bright diamond rings.

Now all these things are stored away
In boxes like cars on a train.
The boxes are big and heavy.
To move them it takes a small crane.

The crane is on a special truck.
Henry, can you say special truck?
If that crane comes over your head
You had better make sure you duck.

Now maybe you have never been
To Valparaiso Chile.
But you live in a big seaport
Although it’s not quite so hilly.

New York has many ships that come
To bring you some wonderful things.
Such as plastic trucks and legos,
And spices and fruits, slides and swings.

But here’s a fact you may not know.
A secret to you I’ll confide.
You’ve not only seen these boxes.
You have actually been inside!

Henry, now I’ll give you a clue.
Of where to find a box near you.
Take the R train north, just four stops.
Exit at DeKalb Market shops.

Clever people took the boxes
And turned them into little stores.
Maybe some of those containers.
Were once on Chile’s bustling shores.

So next time you take the subway
And glamor the people silly.
When you get to downtown Brooklyn.
Maybe you will think of Chile.